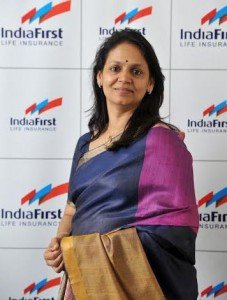 “This will augur well for the insurance industry as this savings can be tapped by insurers,” she said.

For instance, the increase in rent rebates under Section 80GG will result in increased disposable income which could be channelized towards improved savings, she explained.

Pointing out that the budget proposed listing of general insurance companies for the first time, she said “It will be interesting to see the impact that listing of the company would have on operational efficiencies and results.”

Ms Vishakha hailed the government’s commitment to MNAREGA. “We believe that the allocation of INR 38,500 crore MNREGA will continue to support the upliftment of the rural population.”

She also hailed the extra push to investments in infrastructure, with an allocation of Rs 2.19 lakh crores for rail and road networks, and expressed the hope that it could contribute to increased purchasing power and disposable incomes among all those connected with it.

By : R M Vishakha ,MD,CEO IndiaFirst Life Insurance
“Market players were expecting a little more focus and clarity on what the key agenda for the revival of economic growth and bank capitalization. The Budget was a little disappointment in that sense. The good move is – giving a ‘statutory status’ to AADHAR. This would benefit the economy in the medium to long run. It will bring about a fundamental shift in which subsidies are given and the monitoring of tax compliance. In the long run it  is great way to reduce subsidy outflow, increase tax collection, reduce fiscal deficit and the interest rates and bring about higher growth. Provisions such as higher dividend tax, and lower than market expectation of funds allocated for bank capitalization is a little disappointment. Having said that, Country s growth is not just about what is done one Union Budget. Yearly Budget can only be a drop in the ocean of factors that governs economic growth. I would look at factors like
1) How many kilometer of roads getting laid,
2) What the railways do for expanding its operations & spends
3) How well the Government ensure the contacts enforceability and speedy judgments delivery and
4) above all, on how the Government will collect all the tax dues from every entity that is supposed to declare their income & pay taxes.

As the interpretations of the Budget keep unfolding over the next few weeks, let’s not forget to keep a watch on all those four key factors which will give an indication for a medium to long term economic growth for our country”
By : AK Sridhar CIO IndiaFirst Life Insurance

Immediate Annuity plans provide regular income in the hands of the customer. The customer pays a lump sum amount to the insurer who in turn starts paying ‘annuity’ i.e. regular payouts structured to be paid for a lifetime and that only starts when one is deemed to have retired.

Budget 2016 proposes to reduce service tax burden on single premium annuity plans. Called the Immediate Annuity plans in the insurance industry, the composition rate of service tax on single premium annuity (insurance) policies is proposed to be reduced from 3.5% to 1.4% of the premium charged. This will translate into higher regular income /returns in the hands of the customer. In absence of a formal social security structure and an ageing population, this is definitely a welcome move.

Neel Achary is the editor of Business News This Week. He has been covering all the business stories, economy, and corporate stories.