Business News This Week > Business > Historic child-led climate parliament held with the Honourable Vice President and MWCD Minister of India, along with 11 MPs

Child-Ministers and young earth-proactivists associated with Civil Society Organisations from across the country, with the support of UNICEF and NINEISMINE, joined hands to organise a National Inclusive Children’s Climate Parliament to initiate a dialogue on climate change with 11 MPs, in the presence of the Honourable Vice President of India, Shri M. Venkaiah Naidu; the Union Minister for Women and Child Development, Shrimati Smriti Zubin Irani; and the Chair of the Parliamentary Group for Children.

Stressing on the need for taking urgent and quick action to prevent climate change, Hon’ble Vice President of India, in his keynote address, stressed that, “We merely have 10 to 12 years to influence the course of climate change before its adverse impact become irreversible. In a way, the next few years are our only chance for ensuring that our future generations have a chance to lead healthy lives. “We cannot allow apathy in our action to jeopardize our future, our children’s future. Child Rights should be interwoven into key national climate change and adoption strategies, policies and planning document. It is our response to climate change to include a child centric approach and to do this the best way is through platforms like this.”

World Child-Rights Day (WCD) is a global day of action for children, by children, marking the 71st anniversary of the adoption of the Convention on the Rights of the Child (CRC). Climate Change was the key theme of the WCD celebrations in India this year. Young people across the world are speaking up about climate change risks and the action that governments across the world need to take to reverse the same. 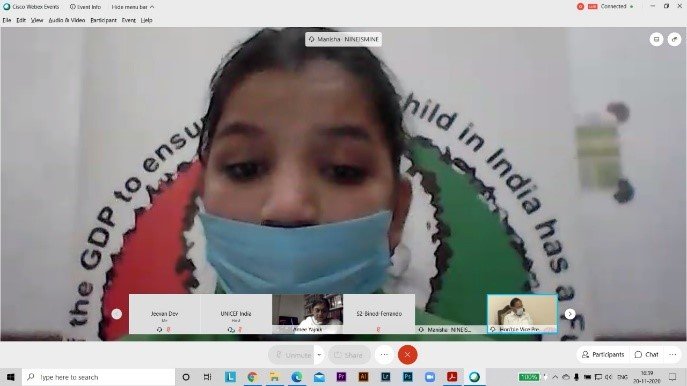 UNICEF, in partnership with NINEISMINE, organised this National Children’s Climate Parliament, which took place digitally. It enabled young citizens of India to proactively engage with key duty bearers and policy makers on climate action. The questions posed by child-parliamentarians, to their elected representatives, at the national level, focused on climate change and, in particular, its impact on children who have inherited this problem and its effects from adults. 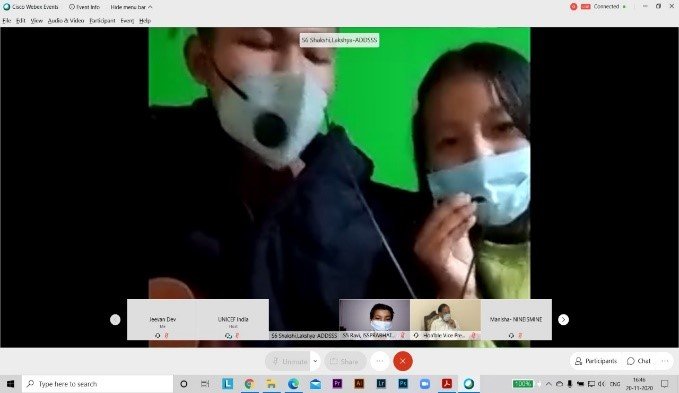 Those present at this child-led climate parliament included Shri M. Venkaiah Naidu, Hon’ble Vice President of India; Smt. Smriti Zubin Irani, Hon’ble Minister of Women and Child Development; Smt. Vandana Chavan, Hon’ble Member of Parliament, Rajya Sabha and Convener, Parliamentarians’ Group for Children; and Dr. Yasmin Ali Haque, Chief — UNICEF. Members of Parliament from different states were also present, namely Amar Patnaik and Sasmit Patra from Orissa, Arwind Sawant from Maharashtra, Amee Yajnik from Gujarat, Krishna Lavu from Andhra Pradesh and Dr Banda Prakash from Telangana, along with other MPs from across India. These MPs engaged with a zero-hour session with Smt Heena Gavit, MP for Nadurbar Maharashtra posing questions to MPs which were drafted by child-parliamentarians themselves. The aim was to create 1000 Greta Thunbergs, who are able to understand and amplify the voice of their Mother Earth and her vulnerable children. 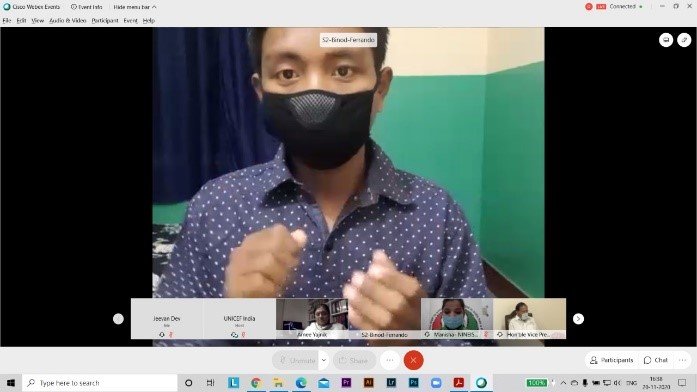 Manisha (17), child Vice-President of the National Inclusive Children’s Parliament (NICP), strongly emphasised that though children may not be voters, their voices can be stronger than the votes of adults, and, hence, it was necessary for children to speak out now in order to secure their future. She further stressed on the importance of raising one’s voice for this important cause: “’Nothing about us children, without us children’. In other words, the need for children to engage actively in policy making is real; we need to proactive citizens of today (and not just the future).”

Smt. Smriti Zubin Irani, Hon’ble Minister of Women and Child Development, underlined her role and that of her counterparts pledging, “that we, in our actions, are committed to being environmentally responsible and prudent in resource actualization. We are particularly proud that our young citizens have joined us today to not only to reflect on our past, deliberate on the present but also dedicate ourselves to an environmentally conscious future.”
The Climate Warrior movie, presented by UNICEF, highlighted the contribution of young climate warriors towards the conservation of the environment.

The children of the NINEISMINE campaign are the key organisers of the NICP that seeks the empowerment of children in local neighbourhood circles; these children meet on a weekly basis to address issues related to child rights and earth rights. Aged between 10 to 17 years, spread across the length and breadth of the country, the children engage actively for the cause of child and earth rights, ensuring positive and sustainable action by one and all. Young advocates Binod Debbarma (Ferrando Tripura), Tamiltulasi (DNSST, Tamil Nadu), Sakshi and Lakshya (Anugyalaya, West Bengal), Ravi (Prabhatara, Delhi), and Rimjhim (Dibyanga Natya Bidyalaya, Assam) shared their stories and demands. These Child Ministers have been working on climate action and have engaged with various stakeholders, on multiple platforms, with the belief that ‘there can be no child-rights without earth rights’.
These child parliamentarians have engaged with over 50,000 young advocates in the run-up processes to help their peers understand the science of climate change. The National Inclusive Children’s Parliament also met in the previous week to prioritize the recommendations and inputs received through these engagements and, in particular, to the preceding Inclusive National General Assembly with 100s of children across the country. They had genuine consultations with their friends from across the country, including children from the most vulnerable sections of India, who crossed great hurdles to overcome various challenges of poverty and digital exclusion during this COVID pandemic.

Following this, the children presented their personal stories on the impact of climate change. Children from Assam used the soil of the Brahmaputra to present their commitments to reduce, reuse and recycle while strongly emphasizing the need to refuse. The child parliamentarians presented their Climate Charter of Demands to the law makers at the end of each of their stories related to the impact of climate change on their lives.

The demands included: green public transportation options, clean environments and access to safe hygiene services, ban on single use plastics, funding and prioritization of the afforestation effort, greater awareness in schools and communities, investing in research to study the intersection of climate change and public health in India, stronger enforcement by local governance bodies on limiting pollution and bridging the digital divide to ensure equal opportunity for education and towards building a climate movement.

“Include children in the designing of new policies that can reduce the adverse impact of climate change”, said Smt. Vandana Chavan, Hon’ble Member of Parliament, Rajya Sabha and Convener, Parliamentarians’ Group for Children. She also added that societal behavioural changes often begin with children becoming aware of the problems of their communities. “We strongly believe that child role should be recognised and explicitly integrated into key national climate change and adaptation strategies, policies and planning documents. By including children and young as protagonists of climate policies, we can device solutions that will be implemented in the years and decades to come.” added Ms Chavan.

Shri M. Venkaiah Naidu said, “We cannot allow apathy in our action to jeopardize our future, our children’s future. Child Rights should be interwoven into key national climate change and adoption strategies, policies and planning document. It is our response to climate change to include a child centric approach and to do this the best way is through platforms like this.”

In conclusion, Dr Yasmin Ali Haque, Chief — UNICEF, India thanked all the dignitaries present at the session. She closed the webinar by stating that, “We should listen to children closely. We cannot talk about children, without them. They must be involved in dialogue. Together we can harness science, evidence, and build future better”. Climate action should now not only be limited to a few strategies but this climate change pandemic should now be declared as a climate emergency. They stand strongly to protect their Mother Earth and her rights”, added Ms Haque.

There were simultaneous inclusive children’s parliaments, with state assemblies, organised in 5 other states of India: Assam, Jharkhand, Madhya Pradesh, Maharashtra and Delhi. The child citizens of Assam have also released their children’s manifesto in the run up to the state elections in Assam, scheduled for early next year. Multiple media interactions were held with some children handling the social media channels of key persons including that of Chief Minister of Assam Shri Sarbananda Sonowal.

Br Steve Rocha the National Convener of NINEISMINE and the Director of PRATYeK said, “India has created a precedent for the world, in organising a formal platform where the highest levels of governance listen and respond to its young citizens as present and active contributors of a participatory democracy. We envision the day when 543 child-parliamentarians representing 543 parliamentary constituencies (representing numerous federated neighbourhood child parliaments) engage annually with 543 Members of Parliament in India’s Parliament.”

About UNICEF
UNICEF works in some of the world’s toughest places, to reach the world’s most disadvantaged children. More than 190 countries and territories, we work for every child, everywhere, to build a better world for everyone. For more information about UNICEF India and its work for children, visit www.unicef.org/india

About PRATYeK
PRATYeK, a child rights organization, endeavours to build the agency of children to work as advocates of child rights and earth rights. It envisions a world where every child stands for thr right of everyone. The ‘e’ of its logo stands for Education, Empathy, Empowerment, Engagement, Ethics and Equity, for Every right, for the Earth, for Every Child-for Everyone !!! Visit https://pratyek.org.in/

About Neel Achary 4877 Articles
Neel Achary is the editor of Business News This Week. He has been covering all the business stories, economy, and corporate stories.