SWIFT data shows a double digit growth of RMB adoption by financial institutions established in all regions. In
February 2016, 1,131 banks were using the RMB for 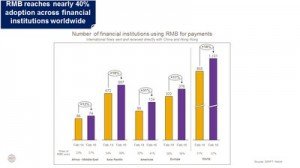 The SWIFT data also indicates that 24% of the offshore RMB payments done with mainland China and Hong Kong are handled by Chinese banks with a global footprint, meaning Chinese banks that have offshore branches and/or
subsidiaries.

“The global volume of payments in RMB fluctuates, and is actually down by value compared to last month, likely influenced by the seasonal effect of the Chinese New Year,” says Michael Moon, Head of Payments, Asia-Pacific at SWIFT. “Furthermore, as widely reported in the press, the number of days it takes to settle payments in RMB has grown to the highest level in many years. The adoption of the currency by more financial institutions, within Asia-Pacific and abroad, will however further increase the global utility of the RMB for payments
and, over time, will drive continued internationalisation of the Chinese currency.”

In February 2016, the RMB remains the fifth most active currency for global payments by value with a share of 1.76%. This represents a decrease of 27.5% compared to January 2016. Payments across all currencies decreased in value by 1.3% during the same period.