San Francisco-based multi-hyphened creative, event planner to the elite and owner of Jonathan Rachman Designs adds author to his repertoire with the release of his memoir, The Garlic Peanut Story. This came from a desire to pay tribute to a beloved adopted sister and was written after her passing, via Jonathan’s letters of gratitude that reveal a tumultuous journey in an archipelago where persecution of LGBTQ remains commonplace.

Through The Garlic Peanut Story he expresses his gratitude for a sister whose love sustained him through a painful childhood while recollecting the pain of being born different and growing up queer in a large and dysfunctional family. He also goes on to contemplate on his travels abroad, learning to write and the discovery of gay mentors who empowered him with good counsel and kindness. 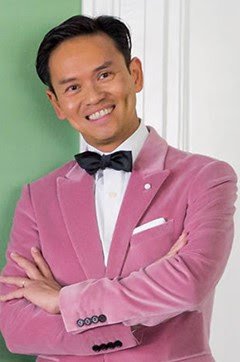 Jonathan is also available to share his decorating tips to refresh your home for the New Year!

As an avid traveler, Jonathan has explored most corners of the world and his gorgeous interiors have graced the covers of many stylish magazines such as Elle Décor, Modern Luxury Interiors California, California Home + Design, Haven and KDHamptons to name a few. He caught his big break when he ventured to start his own business as a florist and was discovered by Marc Jacobs. He was asked to do the arrangements for his San Francisco flagship store and via word of mouth managed to pick up high end clientele, one of them being The Four Seasons Luxury Hotels.

For most, home renovation wasn’t on the 2020 vision board, but after half a year of shelter in place, we realize our personal space and professional needs must merge. As one of the Bay Area’s top interior innovators Jonathan has been helping clients reconfigure, redecorate and reorganize their homes to accommodate all the roles (from office to day care to gym) a modern living space now plays. Some of the design modifications he has seen in the field include:

Jonathan never received formal education in interior design but rather trained in fashion and hospitality management in Switzerland. These two elements carried over to his design style and as a self-proclaimed romantic, he passionately believes that good design much like happiness, comes from within and should always tell a story. He also believes that every color, as well as hue and temperature have the power to affect us mentally and emotionally. Most people have been conditioned from early on either culturally or geographically to be influenced by how we perceive various colors. Now more than ever, as most are in quarantine, mental health has become a primordial part of his design process. Jonathan attributes his aesthetic to be a combination of East and West, he is not one to follow trends but is wise to respect those before him. Hubert de Givenchy, Monsieur Dior are the two legends that always inspire him: Classic and iconic.

Jonathan was raised by his parents and taught to always dress appropriately for occasions but reinforced through boarding school to “dress like a gentleman.” So now when he travels, he makes it a point to “be considerate of others” by keeping his look chic yet comfy. He can share his tips and “must haves” for long-haul flights and cures for jet lag as well as styling tips and recommendations for those on the go.

Every year Jonathan takes a “mini” round-the-world trip to his homeland of Indonesia, before traveling back through Europe to get back home to San Francisco and always travels with his partner of over 26 years. Jonathan credits their relationship longevity to both growing up with positive role models, since their parents remain together and are a prime example of a strong relationship to this day. Their motto as a couple is: Eternity is too short; eternity is not long enough.

About Neel Achary 4877 Articles
Neel Achary is the editor of Business News This Week. He has been covering all the business stories, economy, and corporate stories.